The Inns of Court Regiment (ICR, the Devil’s Own) and the City of London Yeomanry (COLY, the Rough Riders) have a large number of memorials, both in London, but also elsewhere, notably in Normandy and northern Europe, where the ICR, part of the liberating forces in 1944-45, are still remembered with gratitude and annual ceremonies.
3. Berkhamsted, Hertfordshire: to the Inns of Court Regiment Officer Training Corps 1914-18;
4. St Bartholomew the Great, London EC1: to COLY (Rough Riders) War Memorial and Roll of Honour of both WW1&2;
4a. War Memorial at the Royal Exchange in the City;
5. Waltham Abbey, Essex: to the Rough Riders killed in the Boer War;
6. Royal Military Academy, Sandhurst: Memorial Chapel;
7. Ypres, Belgium: Saint George's Memorial Church;
8. Graye-sur-Mer, Normandy: various memorials to the soldiers of C Squadron ICR and the other troops who landed on Juno Beach on 6th June 1944, and liberated that village;
9. Jerusalem Crossroads, Normandy: to those killed in this “friendly fire” disaster of C Sqn and 73 Sqn RE;
10. St Gabriel-Brécy, Normandy: a monument north of the village, erected by the family of Sgt Jack Wright;
11. L’Aigle, Normandy: Rue Jack Howdle named after Lt Jackie Howdle MC ICR, and a museum display;
12. Templeuve, Belgium: monument marking the town’s liberation by ICR;
13. Vers-sur-Mer, Normandy: ICR Bench at the new British Normandy Memorial (unveiled 6th June 2021);
14. National Memorial Arboretum, Alrewas, Staffordshire: a plaque in Yeomanry Avenue and Home Service Force Grove.

Memorial ​to the fallen of the Great War and WW2
The inscription can also be translated as "SANGUINEM PRO PATRIA LARGITIS" ("For those who generously gave their blood for their country") and "HOSPITIUM SOCIIS / FILIIS PARENTES" ("Offer your solidarity in honour of the allied sons").

The end piers bear the inscriptions "CIƆ IƆ CCCC XIV" and " CIƆ IƆ CCCC XIX" using  roman numerals in the unusual apostrophus form for the dates 1914 (MDCCCXIV) and 1919 (MDCCCXIX).
Brass plaques on the inside face of each pier record the names of the fallen from the First World War, listing 35 people in total.

A bronze plaque on the central pylon listing 66 further names of the fallen from the First World War, in two columns.
​
In November 1984 a bronze plaque was added to the bottom of the memorial listing another 29 names from the Second World War. It is engraved with the following inscription:
IN MEMORY OF OUR COMRADES
OF THE
INNS OF COURT REGT
WHO GAVE THEIR LIVES
IN THE 1939-45 WAR
The Treasurer, His Honour Judge Argyle MC QC, a former member of the Regiment, dedicated the later plaque on Remembrance Sunday that year.

Attached to the wall inside the entrance of the “Drill Hall” are three plaques:

​A Memorial Service took place on 1st May 1949 when two matching tablets (1914-18 and 1939-45), were placed one on each side of the doors at the west end of the Chapel;
The tablets were dedicated by the Revd J. du B. Lance MC. The unveiling ceremony (on 1st May 1949) was performed by the Honorary Colonel, Brigadier The Marquess of Reading. The Service was attended by a detachment of serving members and many ex-members of the Regiment.

In addition, a Roll of Honour listing the names and a short citation of each of the 64 Officers and Other Ranks who fell while serving with the armoured car regiment during the Second World War, is placed in the Chapel. 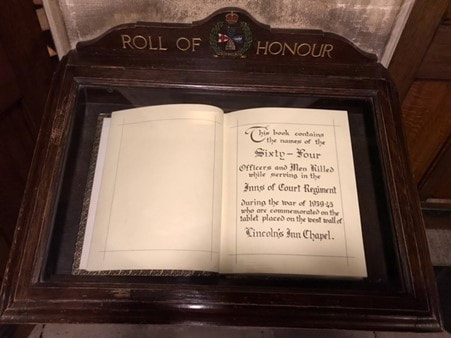 ​There is a Great War memorial inscribed:
Inns Of Court Mission Institute and Working Men’s Club
In Memory of those Members who fell
in The War 1914 - 1918
together with a list of 31 names.

However, this is not specifically an Inns of Court Regiment memorial.
https://www.iwm.org.uk/memorials/item/memorial/6311

Berkhamsted, to the Inns of Court Regiment Officer Training Corps 1914-18

​The memorial, erected c1920, is made of sandstone with a smooth finish. It consists of two plinths forming ‘steps' on which stands a base with ogee-shaped moulding around the top edge. On the top of that stands the main base which is made up of blocks of stone with the vertical corners chamfered. The main base is capped with more mouldings on which stands a tapered needle-like column. The memorial is surrounded by a grass plot enclosed by posts and chains.
​A later inscription on the base of the pedestal commemorates Lieutenant Colonel Francis Errington (1854–1942), who commanded the Inns of Court OTC from 1913 to 1916 and who published a history of the Corps in 1922:

​NEAR THIS SPOT LIE THE ASHES OF
LIEUT. COL. F.H.L. ERRINGTON C.B. V.D
WHO SERVED THE CORPS FOR 36 YEARS
AND WAS ITS LOVED & HONOURED
COMMANDER: 1913–1916
https://en.wikipedia.org/wiki/Inns_of_Court_War_Memorial and https://www.warmemorialsonline.org.uk/memorial/220866/
​It takes the form of a plaque surmounted by a relief of St George slaying the dragon and the central three columns are flanked by reliefs of angels. Below these is a relief of the COLY cap badge surrounded by the unit's battle honours. The WW2 elements are surmounted by COLY cap and collar badges and underscored by a Royal Artillery cap badge. A pair of regimental drums stand below the memorial. Behind them is a stone laurel wreath with 1914-1918 inscribed.
https://www.warmemorialsonline.org.uk/memorial/254005/

War Memorial at the Royal Exchange in the City

Royal Exchange – this memorial (between the Mansion House and the Bank of England) to the Fallen of all the City of London regiments of the Great War lists each regiment by name. Included, towards the top of the list under the Yeomanry section, are the Rough Riders.


ttps://www.warmemorialsonline.org.uk/memorial/111821/
​PRO PATRIA
[for my country]

In memory of the Officers, NCOs & men of the XXth Battalion Imperial Yeomanry (Rough Riders) who died in South Africa 1900-1902 [the Boer War].
​This Tablet is erected by their Comrades.
None of those listed above came from Waltham Abbey. But their commander Sir Richard Beale Colvin did. He was a local benefactor to the church and went on to become a Brigadier General and Lord Lieutenant of Essex. He died in 1936

​On 28th November 1949 the war memorial in the Baptistry of the Royal Memorial Chapel was dedicated by the Chaplain in the presence of past and present Officers of the Regiment. The unveiling was performed by Lieutenant Colonel WH Newson MC TD. Also in this Chapel is a Book of Remembrance containing the names of those Officers who had been Instructors at the Royal Military College during the Second World War and had been killed. Among them are six Officers of the Inns of Court Regiment:
​† Killed while serving in the armoured car regiment.
Marble panelling over the Baptistry, the centre panel bearing the regimental crest and the following inscription:
THE INNS OF COURT REGIMENT
IN PROUD MEMORY
OF THE OFFICERS OF THE REGIMENT
WHO LAID DOWN THEIR LIVES AND THE
OFFICER CADETS WHO WORE ITS BADGE
AND LATER FELL IN ACTION
1939-1945
SALUS POPULI SUPREMA LEX

As at the RMAS Chapel, this Anglican church, which was built to commemorate the Great War, there are many memorials to those who fell in Flanders, both units and individuals.
[Compiler’s note – it is a fascinating and moving place to spend an hour or two, and a must for anyone doing an Ypres battlefield tour]

Included amongst many is one memorial to the Machine Gun Corps (MGC). In 1918 the Rough Riders were transferred to the MGC - originally as E Battalion, later renamed 105 Bn, and on amalgamation with Sharpshooters finally 103Bn - and served in France, but they chose to remain badged as RR.

​https://www.stgeorgesmemorialchurchypres.com
THE INNS OF COURT REGIMENT
C.SQUADRON LANDED HERE WITH THEIR ARMOURED CARS ON 6 JUNE 1944
TOGETHER WITH A CONTINGENT OF ROYAL ENGINEERS
TO CARRY OUT A SPECIAL MISSION
THIS STONE STANDS AS A MEMORIAL TO THEM AND TO THE WHOLE REGIMENT
IN THE LIBERATING CAMPAIGN FROM NORMANDY
TO THE BALTIC SEA FROM JUNE 1944 TO MAY 1945
SALUS POPULI SUPREMA LEX
DEDICATED
TO THE NOBLE LIVING AND TO THE NOBLE DEAD 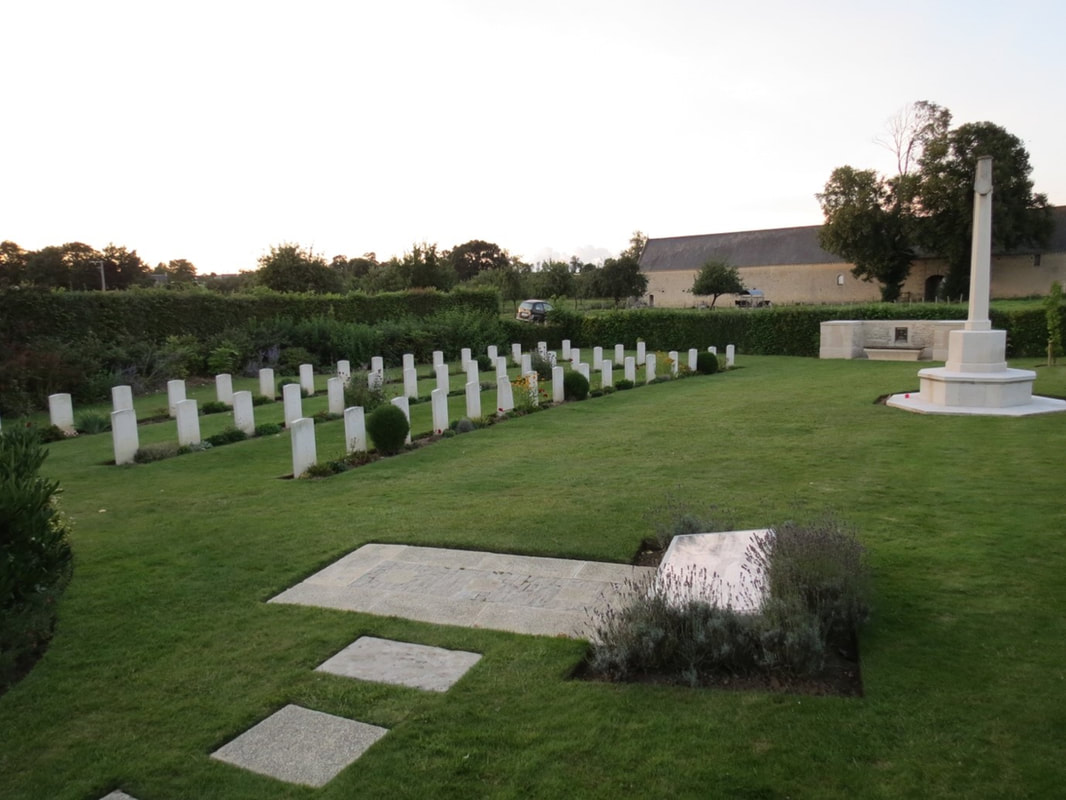 ​a monument north of the village, erected by the family of Serjeant Jack Wright killed there by friendly fire on 6th June 1944. There is no mention of his driver, Trooper Thomas Smith (but both are listed on British Normandy Memorial below)

On 26th August 1984, the fact that the Inns of Court Regiment was the first to enter L’Aigle 40 years earlier, was honoured in a ceremony in the town, attended by Lt Howdle.
​
There is also a museum display.

War Memorial, including a tablet recording the town’s liberation by ICR on 3rd September 1944. 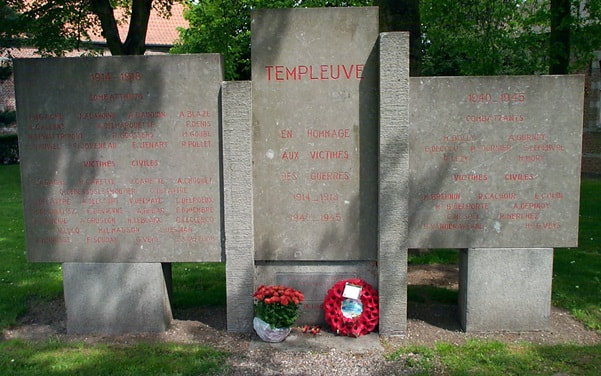 ​The British Normandy Memorial bears the names of 22,442 individuals: British personnel and those of other nationalities who were serving in British units, who died while taking part in D-Day and the Battle of Normandy (6th June – 31st August 1944).
​​
Included are the soldiers of the Inns of Court Regiment, as listed below:
https://www.britishnormandymemorial.org
​